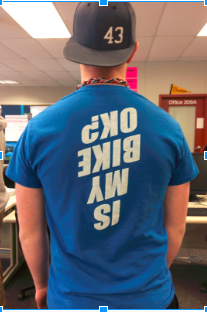 Teens and young adults often take time in high school to find out who they are and what they like. Whether athletes or artists, scientists or historians, people of all ages hope to discover their lifelong passions. For NRHS Senior Trevor Robie, his lifelong passion has been riding dirt bikes. Starting at age 4, Trevor’s father and brothers introduced him to riding. By age 5, he joined racing. Over a decade later, his passion has kept Trevor competitively racing dirt bikes in Derby, Vermont.

Along with riding bikes, Trevor also fixes them. If there is any damage to his bike, he and his dad, Bill, are the ones to make the fix instead of taking it to a mechanic. “Fixing bikes is something I’ve thought about doing for my future. Which is why I did my senior project on that,” says Trevor. For his product, Trevor even rebuilt a dirt bike.

While riding and fixing dirt bikes is fun, it’s not as exciting to be the only one you know doing it. Senior Joey Keeler also rides with Trevor, but not competitively. Joey comments, “I’ve only been riding for 4 years and don’t have my own bike, yet. But I really enjoy it. Whenever Trevor is teaching someone to ride for the first time, his advice to them is  Just send it, don’t think about it! Trevor and Joey are among the thousands of teens in the USA that are able to ride dirt bikes. “Even if you have no desire to race, being able to ride is a good skill to have because it is the same if you were to drive a motorcycle,” says Joey. “This skill will stay with you for life, and as long as you’re safe, you’ll have a good time.”

There are many aspects that make dirt bike riding a more safe experience. “For races, I wear a helmet, neck brace, chest protector, knee and shin guards, boots, gloves and goggles. That’s besides my racing jersey and pants, which also has padding in them,” says Trevor. Even though he has been riding for 14 years, crashes still happen. “I’ve fallen before, on the track and in my own yard. Thankfully, I’ve never broken anything but I’ve had a couple concussions.” This is a dangerous sport, but as long as riders wear the right gear and aren’t reckless, they and their bikes will be ok.

If you want to start riding, you can find someone you know to teach you. Make sure you wear the proper gear though. And if you get good enough, you can join Trevor and race against him this summer in Derby, VT.