The Struggle To Connect 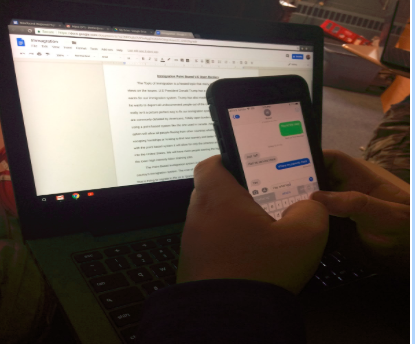 All year, and increasingly so, Newfound Regional High School has struggled to connect to the internet. NRHS internet is one that crashes a couple of times a week, despite how many upgrades are made. The school currently runs on a First Light Fiber Optic Network. This allows more devices in the school to connect to the internet. Previously, the system could account for enough devices if everyone in the school had one device. However,  many people now have more than one, usually a laptop, a phone, and/or an iPod, all of which use the internet. In order to connect everyone’s original device and then a second device, the system needed upgrades. Think of a three lane highway, and every device in the building is a car on that highway. The flow of traffic is slow because there are so many cars. It’s the same with the internet. With the new system, it’s like opening up another two lanes on that highway. Traffic moves faster, and you can accommodate more cars; in other words, more devices can connect to the internet.

Students have discovered that VPNs, virtual private networks that allow students to get around the districts internet blocking, have started to no longer work. Vice Principal Ulrich says he does not know why this is happening, but expresses how this is both good and bad. “It creates a game of cat and mouse. Kids use VPN to get around blocked sites, even though using it is against school policy. When some VPNs are blocked, it causes kids to find new ways to get around it. So, stopping the use of VPN doesn’t get kids off their phones, but gives them the challenge of still getting around the blocked internet. It would be nice if this would get kids off their phones more, but really nothing has changed.”

A biggest issue students and staff alike  have with the internet is that is constantly goes down. The problem is, it’s only pockets that go down at a time. Sometimes it’s just the printers; other times, it’s entire sections of the building.

Today, students and teachers use technology and the internet everyday, for everything. Social Studies teacher, Mr. Lellos, uses the internet for all of his classes. “I use it daily for everything. I use the visual aspect of a slide show for my lessons, and if I can’t access the internet, I can’t get my slide show. Yes, I could teach without it, and I have when the internet goes down, but I want to give kids the visuals they need to learn. Because some kids learn that way.” The internet malfunctioning is not the only thing that interferes with teaching. Blocking websites can help keep out social media and inappropriate sites, but can also be a roadblock for  education. “For classes like the ones I teach, like current issues and military studies, you need that other perspective. And with certain websites, blocking them is good. But there are articles from certain sources you need to expose students to, instead of sugar-coating the world. There needs to be a way to get access to sites for educational purposes.”

Student Mikayla Royea is someone who has multiple devices and uses the internet daily for her schoolwork. “I have a laptop I use for Google Drive. I write my essays on it, especially for Journalism. But it can be hard to do school work here at school because the internet does go down, and sources I need for class assignments can be blocked.”

In today’s generation, the internet and technology have become a necessity to everyday life, almost like the air needed to breath. Though it is less a life-line requirement, and more of an abused addiction. The constant need to connect to the internet is comparable to any addiction. When not connected, people struggle to cope because people are so reliant on access to the online universe. Unfortunately, the current VPN issues at NRHS cause that air to stifle and suffocate learning for all.