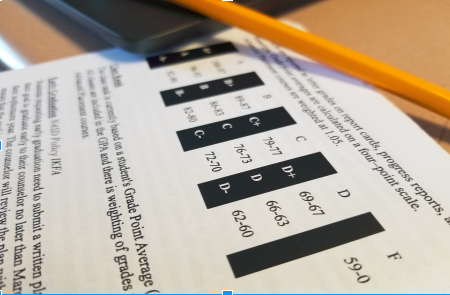 Just four years ago, the most controversial issue regarding the grading system was students’ misuse of the “gifty fifty” – the practice of giving students a 50% for incomplete work in order to help them pass.  More recently, there has been a shift in the grading policy to support the new system of competencies at Newfound Regional High School. This progressive policy requires students to have ownership over their education, while teachers ensure that students have opportunities to learn, relearn, and demonstrate learning in multiple ways. Another recent change was the redo policy-where students that got below a 50% on an assignment could choose to redo the assignment for a higher grade.

Changes have kept the grading system in an inconsistent flux during the past four years. According to NRHS principal, Paul Hoiriis, the grading system has changed three times, but the changes depended on what was viewed as fair. Mr. Hoiriis also said, “the changes depend on the law, there was a bill passed that enforced the competency grading, a scale of 1-4 where our school decided against that”.These constant changes can put students on edge, worrying if their credits or GPA will be affected while teachers are struggling to change the way they calculate grades and input them in the grade book.

The newest change to the grading system occurred near the end of Quarter 1 of the 2019-20 school year, and reverts the policy back to the 0-100. This time, however, the cause of this about-face was the implementation of the district’s new grading software, Infinite Campus. As students and staff scramble to adapt to yet another change, the fourth to the grading system in four years, students hope maybe this one will stand tall and stay put.