Uncool to Juul in School 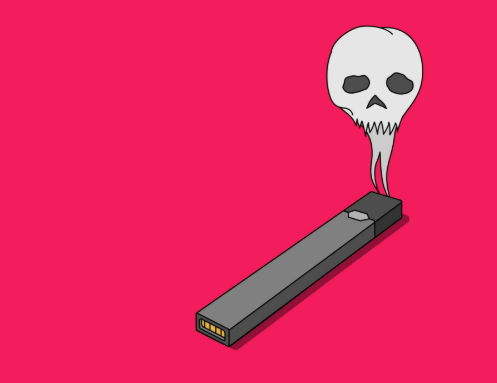 Smoking was cool and popular until 1983, when all the health risks were publicized and “ruined it for everyone”. Juuling and vaping are now following that same trend among New Hampshire teens today. Newfound Regional High School has been seeing this trend for several years now. According to the 2017 Youth Behavior Risk Survey, 23.8% of high school students in New Hampshire admitted to used electronic vapor products on at least one day in the past 30 days. Nationally, the rate was 13.2%, according to the CDC. Clearly, NH’s higher than the national average is concerning to educators and parents.

Historically, teens seem to have been drawn towards nicotine products like Juuls or cigarettes for the same reasons, no matter which generation they are apart of, Even teachers in NRHS admit that, as young adults, they were drawn to such products. There are two common themes that seem to stand out that draw new nicotine users in friends and stressful situations. Mr. Jonathan Young, head of the math department here at Newfound Regional High School, said he got into smoking cigarettes at the young age of 16 because all his friends and family smoked. However, John Lellos, head of the history department at Newfound Regional High School, started Smoking at 13 because he was stressed and in a weird place due to moving to a new school district, divorce, and because his parents also smoked. Both teachers said it was easy to get cigarettes from friends, buying them themselves, or stealing from parents. They would smoke before practice or while at a party, but as time went on, they developed a smoking habit. Mr. Young smoked for 10 years at a pack a day, and John Lellos smoked daily, as well. Luckily, they were both able to quit and, surprisingly, on their first try. Mr. Lellos and Mr. Young both stopped smoking by substituting their smoking addictions with physical activity, such as running, hiking. Fitness, in general, is what helped these two individuals stop their unhealthy smoking habits.

Today, Juuling is a new method of smoking among teens. Mr. Lellos agrees that Juuling is a fad and believes it will die out, much like cigarettes have, but that it will take time because the public is waiting for the health studies about Juul use. Mr. Young, on the other hand, said that, while he had never looked at it that way before, he can now see Juuling as this generation of kids following along with the “cool” thing to do.